Robin Cork has taken up the reins as the TVG Head Honcho, so if you would like more information on events taking place in the Thames Valley area, please contact Robin on 01252 624006 or email robin_brenda@hotmail.co.uk

We have existed as a group now for over 15 years (and it don’t seem a day toooo long), with a steadfast set of bodies who turn up for meetings and events, and some people who just drop by occasionally when they fancy it, which, we feel, is a sign of a healthy group. There is no leadership or hierarchy system, all members being equal, and no type of funding arrangements, so no problems along those lines. “Thames Valley” really means anyone who fancies a trip out to Reading once a month – we have members coming from about a 30 mile radius.

We meet on the last Thursday of every month, gathering some time around 8pm in the The Swan PH, Three Mile Cross, RG7 1AT, just off the A33 near Reading. As with all true wimps, many of us arrive on four wheels, although a few stalwarts regularly get a bike of some description out to impress the rest of us. It is at this point that I’d like to stress that you don’t need to actually own a cyclemotor or autocycle to join us – just an interest in the subject is all you need, an ability to exaggerate all the old glory days of what you’ve been up to with interesting machines – as in “the older I get, the faster I went” mode. We’re all experts at it.

Generally speaking, as a group we put on three main runs during the year, the first being the As It Was Buzz for cyclemotors only, previously held at the Royal Oak PH, Pewsey – but the dire state of the roads on our route has caused us to abandon it. From this year (2019) the As It Was Buzz has been combined with our long-established (18th year) Odiham Run held the next day on the Sunday, both runs starting from The Four Horseshoes PH at Long Sutton near Odiham, so riders can have a whole weekend of unalloyed joy. Our other event is The Silchester Saunter which this year will be held on September 23rd.

The sun was shining, albeit with some wind, on Sunday 17th March at The New Inn, Heckfield, near Hook, Hampshire, where 15 riders turned up for The Stratfield Saye Le–Jog Run. By virtue of the previous bad weather, the intended route had to be modified. Serious flooding had occurred as well as degraded road surfaces. This did not deter the 14 riders and one pillion passenger who turned up and who had a good ride through the Hampshire countryside on the given route in and around The Wellington Estate and Stratfield Saye. 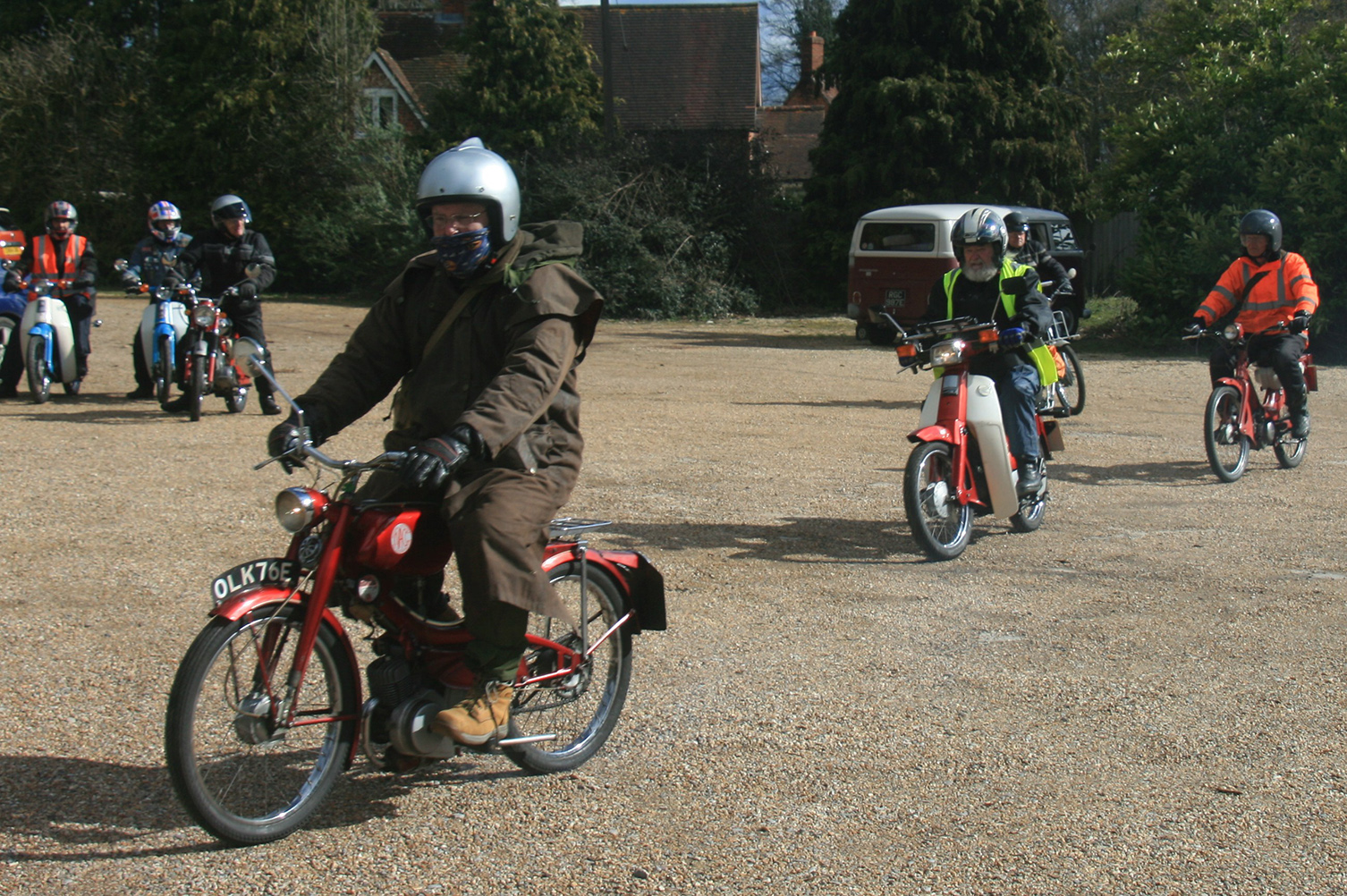 We welcome all sorts of oldish, low-powered machines, although a hardcore (steady boys!) of us are rather besotted with the true cyclemotors genre. But we’ll talk to anybody. We also get up to other things – we often, although not always, have a BBQ gathering in the summer, a time when most of the ladies attached to cyclemotorists can get together and chat about things other than biking, and without the fear of abject boredom for several hours. 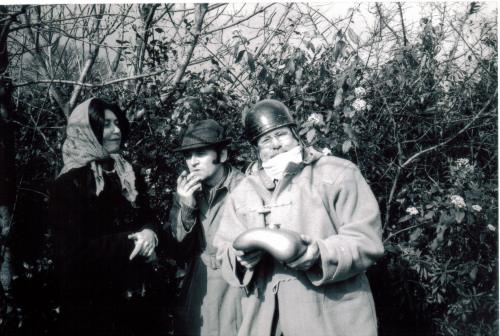 Above: Friends of the Thames Valley Group, Eva & Ken Evaals the renown Power Pak stunt couple . They are seen with the remains of one of their machines that heralded an early retirement, Eva having missed the take off plank. With them is cousin Walter Evaals.

At our Silchester Saunter we do ride interesting machines around quiet lanes, eat and drink at decent pubs … but a big attraction are the cakes at the Half Way Cafe.