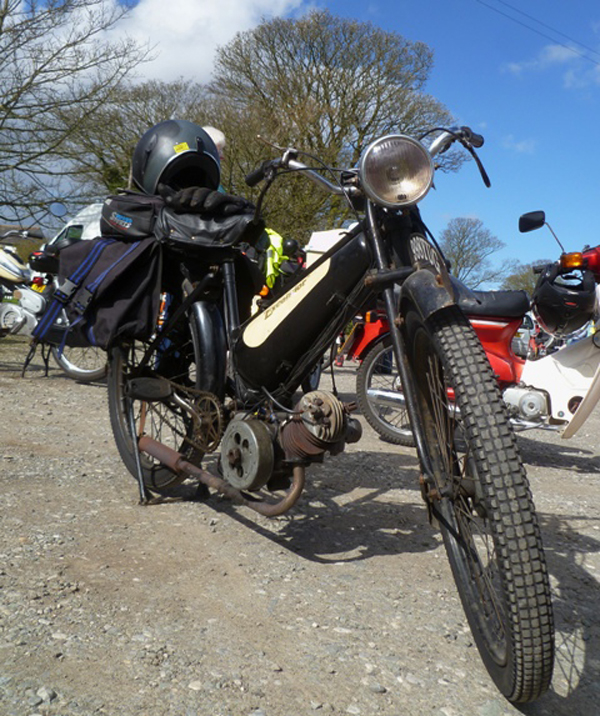 What are these transports of delight?

Cyclemotors
The cyclemotor, or motorised bicycle, dates back to the dawn of motorcycling in the last years of the 19th century but the boom period for these machines was undoubtedly the 1950s. The cyclemotors of this period usually consisted of a small engine (under 50cc) which could be attached to a normal bicycle. The positions used by different manufacturers were many and various: above the front wheel, above, alongside or inside the rear wheel, or between the pedals are typical examples. 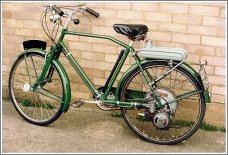 The final drive was often a roller rubbing on the bicycle tyre but other, more positive, transmissions were used. The NACC caters for enthusiasts of cyclemotors from all periods from the 1890s to the present day, but it is the 1950s that the majority of our members are interested in.

Autocycles
The autocycle is a lightweight motorcycle with pedals, very similar to the mopeds of more recent years. The autocycle was developed between the wars and, by the mid-1930s, had adopted a design that changed very little until the end of production in the mid-1950s. Autocycles are usually powered by 98cc engines; most examples used the Villiers Junior, Junior de-Luxe or 2F engines. The most notable exceptions to this were the Cyc-Auto and the Excelsior Autobyk, which used their own make of engine, and the HEC, which was powered by a Levis engine. 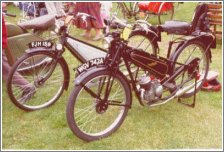 Because of the universal design it can often be difficult to differentiate between different manufacturers’ machines.

Mopeds
The moped is a motorcycle with an under-50cc engine. The first mopeds were equipped with pedals but legal definitions of the moped have changed over the years and nowadays encompass almost any under 50cc motorcycle.

Mopeds originated on the continent in the mid-1950s and soon ousted their predecessors, the autocycles and cyclemotors, from the market place.

Some Notable Makes of Cyclemotor
CYCLEMASTER – probably the best known of the cyclemotors, the Cyclemaster was a complete powered wheel that was substituted for the normal rear wheel of a bicycle. The earliest models had a 25.7cc engine; this was increased to 32cc for later versions. Nearly a quarter of a million of these machines were built in the UK between 1950 and the early 1960s; several other countries also produced their own versions of the Cyclemaster.

MINI-MOTOR – another popular type, built under licence in England by Trojan to an Italian design. The 49.9cc Mini-Motor was mounted above the cycle’s rear wheel and drove it by friction roller.

POWER PAK – Mounted in the same position as the Mini-Motor and also using a roller drive, there were two models of Power Pak: the Standard and the Synchromatic. The Synchromatic had the sophistication of a twist-grip operated clutch.

WALL AUTO-WHEEL – The most popular of the earlier cyclemotors; the Wall was produced from 1912 until the mid-1920s. It consists of an engine and wheel mounted on its own frame and fitted alongside the bicycle’s rear wheel.

The SMITH Motor Wheel and BRIGGS & STRATTON Motor Wheel were developments of the Wall Auto-Wheel. Other models of cyclemotor include: BSA Winged Wheel, Vincent Firefly, Ducati Cucciolo, Berini, Cymota and many more. There are many more pictures of cyclemotors in the NACC Gallery.

Autocycle Manufacturers
Most manufacturers of autocycles were also motorcycle builders, some of the best known in the UK being: James, Norman, Rudge, New Hudson, Raynal, Francis-Barnett and Excelsior. The French VéloSoleX, sometimes classified as an autocycle and sometimes as a cyclemotor, with its engine above the front wheel, is the second most popular motorcycle of all time; it has been in production for more than 60 years.

Moped Manufacturers
Introduced from Europe during the mid-1950s, machines such as the NSU Quickly and Mobylette were quick to catch on. British makers such as Norman, Phillips and Raleigh were soon building their own mopeds to compete. There were very many different makes of moped produced during the 1950s and ’60s although may of them used the same engines such as Sachs, Jlo and Rex. Surviving examples of some of the more obscure manufacturers’ products are quite rare nowadays. There is a comprehensive selection of pictures in the NACC Gallery.